Wine, gold, history, and heritage are all parts of the rich and colorful tradition that is Stevenot Winery. Located in downtown Murphys and in Vallecito, in the heart of the Sierra Foothills of Calaveras County, Stevenot’s beginnings hark back long before their first release of wine in 1978.

The first Stevenots came to the area during the great Gold Rush of the mid 1800’s. During that time vineyards began cropping up throughout the region as miners from France, Germany, and Italy were creating a demand for wine on an unprecedented scale. At one time the Sierra Foothills rivaled the areas of Napa and Sonoma combined in vineyard acreage with over 100 wineries established.

Although the industry eventually declined with the advent of prohibition, it wasn’t long before Barden Stevenot, a fifth generation member of the Stevenot family in Calaveras County, took up where his family had left off and established the winery in the late 1970’s. Recognized as one of the pioneers of the rebirth of wine production in the Sierra Foothills, Stevenot Winery quickly secured its reputation for producing world class wines and for their innovative and award winning style.

Stevenot also looks back at Calaveras County history.  The Tasting Room in downtown Murphys was part of the Rufe and Keilber Meat Market, built in 1893.  Behind the Tasting Room is the Matterson house, built in the 1860’s, which was damaged, but not destroyed, by the 1893 explosion of the nearby Manuel and Garland Store warehouse.  Much of the center of town was destroyed by this accident caused when a clerk left a candle burning in the warehouse which ignited some black powder stored nearby.

At about the same time Barden Stevenot was establishing his winery, the Oliveto family was establishing a distribution business in Jackson, which is now headed by brothers Jon and David Oliveto.  Born and raised in Jackson, Jon and David began working at very early ages with their father Ross Oliveto’s milk distributing business which opened in the late 1960’s.  In 1979 the milk distribution company was sold and the Oliveto family went into the beer and soft drink distribution business serving Calaveras, Amador and Tuolumne counties. In the early 1980’s a wine division was added. The Oliveto family began distributing Stevenot wines in the early 1980’s, when White Zinfandel was their best seller. Oliveto Distributing was honored with the Miller Masters award in the early 1990’s, placing them in the top seven distributors in the United States. They were also awarded the High Life Achievement by Miller Brewing Company in 2002 and 2003, given to the top 40 distributors out of a roster of 450 companies.

On February 10, 2010 Oliveto Distributing, Inc. became the proud new owner of Stevenot Wines and now operates the Stevenot Tasting Rooms on Murphys’ Main Street,and at the winery in Vallecito. Jon and David Oliveto are now owners of the well-respected and long-standing distribution company based out of Vallecito.

Into the twenty first century

Recently the Stevenot presence has expanded beyond the Tasting Room on Main Street to the winery in Vallecito.  The winery is on property developed by John Batten in 1852.  In addition to a facility that allows for local crush and bottling, the vineyards grow Barbera, Chenin Blanc, Malvasia Bianca, and Merlot grapes which provides the opportunity to produce Estate Bottled wines.  As you pass through the decorative iron gates in the dry stone wall, past the pond, the heritage oaks, and landscaped meadow, your eye is immediately drawn to the Batten House.  The Olivetos have put a great deal of thought and effort into the rehabilitation of this mid nineteenth century landmark.  There are ample shaded outdoor areas to enjoy a glass, or two, of Stevenot wine.

Management of the Stevenot label is a family affair.  Jon Oliveto is President of Oliveto Distributing.  Jon lives in Murphys and is Production Manager and Vineyard Manager.  He works closely with winemaker Nancy Steele in the making of each year’s vintage.  David Oliveto is Vice President, Operations Manager, and Office Manager. David’s wife Lorraine is Tasting Room Manager and Head Groundskeeper.  David and Lorraine live in Murphys. The next generation of Olivetos all live in Murphys as well.   Sisters Brooke and Elizabeth have been involved in the business for years. Brooke Peterson is married to Robert Peterson who is a Company Officer and Sales Director.  Brooke is currently on sabbatical to raise Cashton, who anchors the third generation.  He was seen in the vineyards before his first birthday.  Elizabeth is Wine Club Director.  Working closely with her father and uncle, Elizabeth is perfectly placed to learn more about the wine making business. 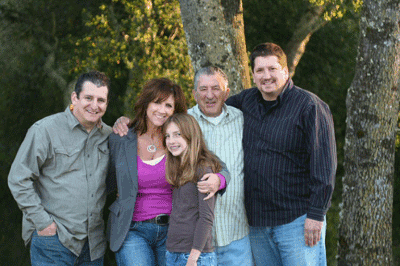 “We are honored to have the opportunity to continue the tradition of Barden Stevenot,” said David. “Stevenot has always been a quality wine and well respected in the community.” “It’s all about quality,” adds Jon. “We have been in the distribution business our whole lives, and will continue to focus on wine making.”

With close to 50 years in the industry serving the region, the Oliveto family knows the business and the community well.